Shafiq had been affiliated with the Jamiat-e-Ulema Pakistan (JUP), a major Barelvi party headed by the late Allama Shah Ahmed Noorani, for the past three decades.

But after the emergence of the TLY, which was formed to run a campaign for the release of Mumtaz Qadri, who was convicted and executed for the murder of the then Punjab governor Salmaan Taseer, Shafiq ended his long affiliation with the JUP and joined the Allama Khadim Hussain Rizvi-led TLP.

The TLP and its aggressive stance on blasphemy issues have attracted a significant number of like-minded people, such as Shafiq, to the group. After succeeding in finding popularity among Barelvis, the group is now focusing on Karachi’s electoral politics with the hope to become an influential stakeholder and has fielded its candidates for all of the city’s national and provincial assembly constituencies.

Terming it a “revival” of Barelvi groups in Karachi, several Barelvi groups, such as the Jamaat Ahle Sunnat, and local Milad committees have announced their support for the TLP in the July 25 general elections.

To gain momentum for their candidates, they have invited the outfit’s chief, Rizvi, to visit Karachi on July 1, when he will be brought from the airport to the mausoleum of Quaid-e-Azam Muhammad Ali Jinnah in a procession. 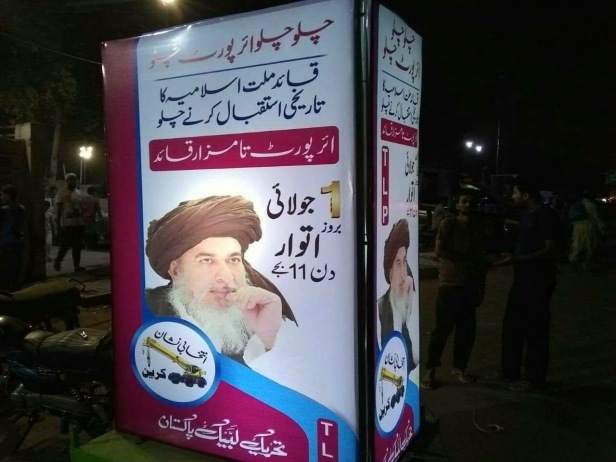 Analysts believe that in some of the city’s localities, such as the old city area, Lyari, Keamari, Mehmoodabad, Korangi, Liaquatabad and New Karachi, the group has been emerging as a challenger to the Muttahida Qaumi Movement (MQM), the Pakistan Peoples Party (PPP) and the Muttahida Majlis-e-Amal, an alliance of five religious parties, and is likely to dent their respective vote banks.

According to the list shared by the TLP, they have fielded candidates from all 21 national and 44 Sindh Assembly constituencies, but the group’s leaders have been mainly focusing on the constituencies containing lower-income Mohajir areas of Liaquatabad and Korangi as well as the affluent Memon and Kutchhi communities.

Hamid Memon, a TLP leader who organised an electoral rally for the group near the Civil Hospital Karachi, told The News that all small Barelvi groups and Milad committees have announced their support for the TLP in the constituency.

“The PPP has a support base within the Baloch community in Lyari, but we have been focusing on the congested and populated narrow lanes of the old city area, where the number of votes are higher than Lyari.”

Mufti Abid Mubarak is another key TLP contender who is contesting the polls from NA-249, a constituency comprising Baldia Town. According to Barelvi leaders, Mubarak is a well-known Barelvi cleric who has enjoyed popularity for his harsh stance on blasphemy issues and for playing a key role in fighting Deobandi groups, especially the Ahle Sunnat Wal Jamaat, over occupation of mosques in the city.

The group’s Karachi chief, Allama Syed Zaman Shah Jaffery, is contesting from NA-247, a constituency comprising Kharadar and Burns Road in addition to Defence and Clifton.

The TLP has fielded Asghar Mehmood from NA-248, a constituency comprising Keamari and the neighbouring islands, where the group has managed to muster support from the local Kutchhi community.

The community, which has opened a number of offices for the TLP, previously supported Abdul Qadir Patel, former president of the PPP for Karachi and a candidate from the constituency.

The JUP, a Barelvi party, had won three of the seven NA seats in Karachi in the 1970 elections with a total vote share in the province of 7.4 per cent and three of the 11 in the controversial 1977 polls under the Pakistan National Alliance. However, after the emergence of the MQM in 1978, the JUP lost its considerable vote bank.

After the emergence of the TLY, Barelvi groups and local Milad committees have been supporting the outfit, considering an opportunity to revive the “Barelvi influence” in the city.

Traditionally, most of the Barelvi groups, except the ST, enjoyed a reputation of moderation and non-violence as followers of Sufism. But in recent years, especially after Taseer’s murder, Barelvi groups, especially the TLY, have become more violent on blasphemy-related issues and are gaining political and street power within their community.

No Barelvi group is on the Ministry of Interior’s roll of proscribed outfits. Last year Sindh’s law enforcement agencies had asked the federal government to mount a watch on the TLY, saying that the outfit has been morphing into a militant outfit. The ST was on the interior ministry’s watch list for several years, but then it was taken off of it