The MMA was a coalition of six religious parties, representing the Deobandi, Barelvi, Shi’ite and Ahl-e-Hadith schools of thoughts that first joined hands to create the Difah-e-Afghanistan Council, a greater alliance put together by Maulana Samiul Haq in 2001 to resist the US arrival in Afghanistan. The alliance, under the leadership of Allama Shah Ahmed Noornai, then head of the JUP, participated in the 2002 polls and bagged a total of 45 seats in the National Assembly. Similarly, the coalition won 49 out of 99 seats in the KP (then NWFP) assembly and formed a government in the province. Securing a number of seats in Balochistan, the MMA joined a coalition government in Balochistan with Pakistan Muslim League-Quaid (PML-Q).

By October 2007, the MMA split because of a widening rift between the JI and the JUI-F. Political differences between the two parties arose after the MMA backed the 17th Constitutional Amendment which granted the then president Pervez Musharraf legal cover. However, the JUI-F had a solo-flight in the 2008 general elections by using the name and election symbol of the MMA while the other components of the alliance, especially the JI, boycotted the elections.

In the 2008 polls, the MMA could secure only seven National Assembly seats, eight in the KP Assembly and six seats in the Balochistan Assembly.

The JI leaders insist the MMA performed badly in the 2008 polls because of the JI’s boycott, but political analysts disagree. “The circumstances in 2002 were totally different. The MMA skillfully managed to exploit the anti-US and pro-Afghan Taliban sentiments of Pakistanis at that time. But the situation changed after a few years,” says Aziz Buneri, a Peshawar-based journalist.

Political analysts believe the religious parties still draw their inspiration from the success in 2002 polls and think they could achieve success again through unity in their ranks and by reviving the MMA. But differences between the leadership of the JI and the JUI-F are the hurdles in the formation of an alliance.

According to media reports, leaders of both the parties, addressing public meetings and gatherings in various parts of the KP, crossed all limits while criticising each others. “We don’t need Fazlur Rehman’s Shariat as in his Shariat, he will be the chairman of Kashmir Committee and Akram Durrani will be a senator,” said JI chief Munawar Hasan. In response, Fazlur Rehman, in a statement, said that having the JI in the MMA will be like adding alcohol in pure water.

“The JI always showed flexibility as it worked for strengthening the alliance of the religious parties, but stubbornness of the JUI-F chief is the main obstacle in the revival of the MMA,” says Mushtaq Ahmed Khan, provincial leader of the JI. “We are ready for the revival, but first the objectives and principles of the alliance must be defined. If it is for the sake of power, then there is no point in having an alliance.” 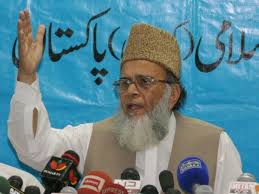 The JUI-F leaders claim the JI is demanding 50 per cent of the MMA tickets for its candidates in the upcoming polls and governorship of the KP in return for restoring the MMA. But, the JI leaders have dispelled the impression. “The JI is playing a non-serious role in the revival of the MMA. On one hand, they are talking about the revival of the alliance while on the other, they are talking about making Difa-e-Pakistan Council (DPC) as an electoral alliance as well as negotiating with the Pakistan Muslim League-Nawaz and Pakistan Tehrik-e-Insaf (PTI),” says a former senator of the JUI-F.

Analysts believe that there are slim chances the two parties will be able to come together on one platform. However, Qazi Hussain Ahmed, former JI chief, is trying his best to end the differences between the JI and the JUI.

The JUI-S also ruled out joining the MMA. “Fazlur Rehman is politically isolated and made the announcement of reviving the MMA to mobilise his party workers,” says Maulana Yousaf Shah, central spokesperson for the JUI-S. He says his party might form a new electoral alliance before the next elections.

Sources privy to the DPC say that the JI and the JUI-S have been working to form another alliance to counter the MMA, which may consist of political and religious parties that are part of the DPC. Fazlur Rehman has kept his party out of the DPC.

While the religious parties will have a minimal impact on national politics, the JUI-F and the JI consider KP as their stronghold. “The JUI-F has a strong votebank in the KP’s southern districts and Fata while the JI is limited to two districts — Upper Dir and Buner,” Buneri opines, adding that the popularity of PTI chief Imran Khan in the province will significantly split the conservative votebank, especially of the JI. He thinks restoration of the MMA without the JI would be a blow for the latter in the upcoming polls.

Known as a sharp politician, Fazlur Rehman is playing a leading role in the KP politics. After reviving the MMA, the JUI-F is now focusing on mustering the support of influential politicians from various region of the KP. He has succeeded in winning the support of two sitting MPAs — Atiqur Rehman from Hangu and Munawar Khan from Lakki Marwat. He is also trying to bring the Sardar Yousaf family of Mansehra into the fold. Sources say the PPP and the PML-N are also interested in entering an electoral adjustment at district and division level.

On the other hand, the JI may make an electoral alliance with the PTI which could become a challenge for the JUI-F. The JI has already begun tackling the JUI-F by awarding a party ticket to its provincial chief Prof Ibrahim Khan to contest from NA-26 Bannu, from where Fazl Rehman is an elected MNA.

The writer can be contacted at: zia_red@hotmail.com